Bypass filtration is a filter added to the lube system that will have a much higher efficiency at a smaller particle size.

Bypass filter efficiency rating and particle size retention will vary depending on the manufacture and media used, but all have the same goal, which is to reduce the level of contaminants in the lube system. Bypass filtration also increases the filtration system contaminant retention capacity.

This paper is intended to discuss the benefits of bypass filtration for reducing contaminants in diesel engine lubrication systems found in diesel engine lube oil that will cause wear, reduce component and ultimately engine life with increased maintenance and repair costs.

Current engines utilize a full flow filter designed to maintain a specific level of cleanliness and capacity, which is determined by the engine manufacture. Cleanliness levels are to protect moving parts within the engine and capacity is needed to obtain the desired oil change interval.

There are many situations that may introduce more than the normal levels of contaminants. They include long idle times, harsh conditions, or the need to increase the time between oil change intervals.

A standard oil filter element may not have the ability to filter the level of contaminants out over longer times or have the capacity to hold the contaminants during the extended period.

A bypass filter is added to the lubrication system to supply the additional filtration and capacity for these conditions.

A typical lubrication system will comprise of a suction strainer, oil pump, oil pressure regulation valve, oil pipe or passages to transport the oil from the pump to the filter, oil cooler and cooler bypass valve if applicable, and a full-flow oil filter.

The engine lube oil pump pumps an excess amount of lube oil flow to cover a wide range of operating conditions, that range from a new engine to an engine with thousands of miles on it and operating under cold and hot temperatures. If not needed the excess oil is diverted or regulated back to the engine sump.

One of the functions of lube oil is to provide a barrier between moving and rotating surfaces. As the clearance between these components increases due to wear, a higher flow of oil is required to maintain the gap in order to keep them from touching and causing premature failure.

Initial start up of an engine is the least lubricated time and thus may be the most detrimental to the engine life because lube oil has drained from the surfaces and for an instant there could be metal-to-metal contact.

The actual amount of wear or damage during this time is hard to predict, but can be directly effected by the quality and condition or cleanliness of the lube oil. The area of concern and the topic covered in this paper is the longterm effect of dirty lube oil and the benefit of adding a bypass oil filter to the engine lube system.

Contaminated lube oil is one of the leading causes for premature engine failure. Engine lube oil will become contaminated or dirty with time so maintenance also plays a big part on the benefits of a bypass oil filter.

The following chart shows the comparison of a standard filtration system without bypass and then with bypass on the same vehicle. The service providing the particle count at this time was only able to give a two level count, (6u/14u) compared to a three level (4u/6u/14u) count. 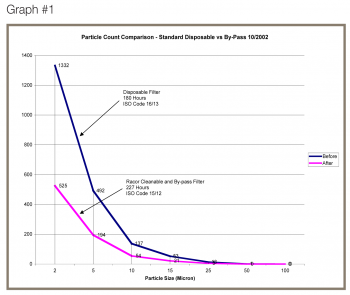 The initial particle count after 180 hours with standard filtration was an ISO cleanliness code of 16/13, (6 micron/14 micron respectively). A sample was taken and then the oil and full-flow filter were changed. At this time a bypass filter was also installed.

After 227 hours of operating in the same conditions, the truck was brought in, another sample taken and the results of the particle count indicated a 15/12 ISO cleanliness code, cleaner than at 180 hours.

The oil was left in the engine and run until just over 10,000 miles was reached and a third sample was taken. The ISO cleanliness at that time was 13/10. This test clearly shows the benefits of a bypass filter in reducing the damaging particles in the lube oil.

A Field test by Meddock (a) on two separate trucks, one with bypass and another without bypass showed that an engine with a bypass filter will have a lower contaminant particle count even after an extended period of time.

An oil sample was taken without an oil change and a bypass was installed on truck # 2. 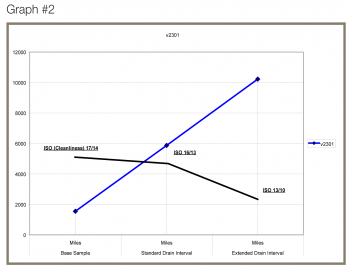 Just as important to the wear particles generated during operation is the elemental condition of the lube oil.

Referencing Jim Fitch (b), there are four lethal diesel engine oil contaminants that are important to monitor. They are glycol, fuel dilution, soot and water. Any of these elements are capable of causing premature or even sudden engine failure.

Tracking the oil condition is a necessary tool for predictive maintenance and during extended oil change intervals.

Aside from dirt and wear particles, the oil condition or time to service could be based on the viscosity, TBN, oxidation, glycol or soot, even if the cleanliness particle counts are with in range. 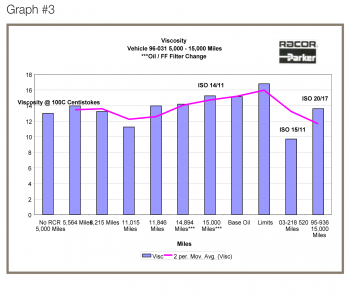 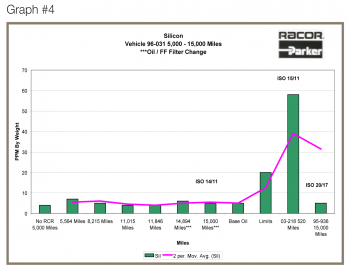 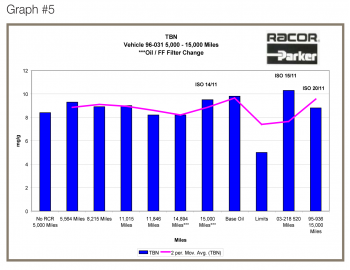 The first bar is at the normal oil change interval of 5,000 miles without bypass.

A bypass oil filter was installed with an oil change, the results are logged beginning with the second bar taken up to the desired service interval of 15,000 miles.

The eighth bar is a base, (clean) oil sample and ninth bar is the limit set by the oil analysis report generator for early warning.

The tenth bar was a vehicle with 520 miles that was immediately taken out of service and checked for engine problems based on the oil analysis.

All of the levels had moderate increases over the period of the test, however they remained stable and within limits due to the bypass filter.

Graph #6 is a field test by Meddock (a) which shows oil oxidation versus mileage. Oil analysis and particle analysis samples were taken periodically during the test to monitor the oil condition of the oil and to assure it stayed within satisfactory operating limits. 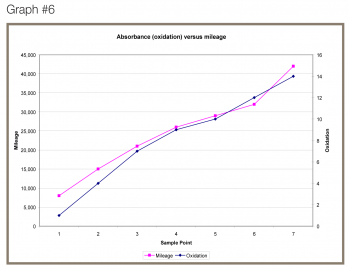 With an oxidation level of 25 absorbance units as a high limit, it is a clear indicator that at some point in time oxidation became the indicator of when to change the oil rather than an increase in contaminants such as dirt and wear particles. In the case of this test, oil analysis indicated the wear particles were kept within allowable limits due to the bypass filter.

In all testing it was evident that the engine oil remained cleaner, and well within operating limits for a longer period of time when a bypass filter was installed.
With cleaner oil there is less maintenance, engines last longer and lower maintenance costs.

Even the best of relationships sometimes have friction and, in most cases, that friction is manageable — unless it takes place inside of a heavy-duty engine. In that case, any particulate over the size of say, three microns – the distance between a piston and a cylinder wall — can lead to a breakup of major proportions. 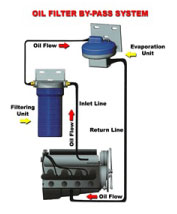 That’s exactly why maintenance supervisors on land and sea make it standard operating procedure to change an engine’s oil regularly, even though filters, oil, tools, and labour all add up to significant ongoing costs.

But just a few short blocks from the Port of L.A., one company – Marine Oil Technology (MOT) – has a patented solution that dramatically reduces the need for costly oil changes, saving operators with trucks, vessels, cranes (or anything that operates with an engine and any type of fuel) both time and money. And, equally important to financial managers during this challenging economy, MOT’s technology provides a remarkably fast return on investment – less than a year in many cases.

Founded by Norwegian-born engineers Laila and Alex Weil, MOT’s Bypass Filtration System uses a progressive five-stage filter core to trap damaging particles as small as one micron. The particulate-free oil then enters a heated evaporation chamber where contaminants such as water, fuel, acid, and other corrosives are removed and ventilated into a collection reservoir.

As a result, independent testing has proven that MOT-fitted engines can be operated many times longer without requiring an oil change, reducing oil purchases and disposal by 89%, according to a U.S. Department of Energy report.*

“Not all filters are created equal,” says Weil. “Conventional filters only trap particulates larger than 20 microns and do nothing to eliminate liquid corrosives. That’s nowhere good enough. We filter everything down to just one micron – smaller than the distance between the piston and cylinder wall. As a result, engines equipped with MOT filters can run for years without an oil change.”

“In every case, we’re proving through independent testing that companies are saving money and protecting the significant investment they have in their equipment,” says Jim Scott, MOT Vice President. “Plus, our systems make machinery run cleaner, which helps organizations meet environmental standards that are growing more stringent every year.”

The math is pretty simple: Take a standard drayage truck requiring 44 quarts and that typically undergoes an oil change four times a year, or after 300 hours of service. Based on a typical per-quart price of $3 and a typical volume-priced filter at $30, the total cost comes to $678 annually, not including the significant cost of labor to do the job. By comparison, the price of an MOT Bypass Filtration System is approximately $1,200. During a three-year test period, terminal operator Trapac has run a number of its utility tractor rigs without requiring a single oil change – only the disposable MOT filter needs replacing.

Based on those numbers, especially with labor factored in, an MOT system is likely to pay for itself well within a year and will continue to provide ongoing cost savings every year after that. Multiply those savings by every truck in a typical fleet and the benefit to the bottom line is significant.

Marine Oil Technology is currently one of several innovators benefiting from their relationship with PortTechLA, a public/private non-profit technology incubator and commercialization center funded by the Port of Los Angeles, the City of L.A., and the San Pedro and Wilmington chambers of commerce.

“MOT is exactly the kind of organization we want,” says Bill Walles, Director of Client Services for PortTechLA. “They’ve got a cost-effective solution that will save companies many thousands of dollars, they reduce the need for fossil fuels, and they have a technology that’s great for the environment. The sooner the industry discovers MOT, the better.”